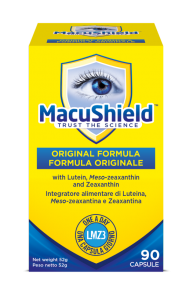 MacuShield® Original was first manufactured in 2006 where it was launched in the UK market. Since then the brand has grown from strength to strength and is now sold in many different countries across the world. In 2015 MacuShield® was acquired by Alliance Pharma PLC Group. Alliance Pharma PLC is a publicly owned international pharmaceutical company listed on the AIM, part of the London Stock Exchange. 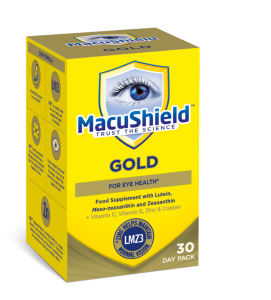 Since its launch, the range of products has increased, but they all still revolve around this core formula.

Carotenoids – Carotenoids are naturally occurring plant pigments found in nature. Over 700 carotenoids have been identified to date, which include the carotenoids lutein, zeaxanthin and meso-zeaxanthin.

Lutein – A natural carotenoid entirely of dietary origin, which accumulates at the macula at the back of the eye. Lutein is most commonly found in dark green, leafy vegetables such as spinach, kale or peas.

Macula – It is the central and most sensitive part of the retina. The carotenoids luten, zeaxanthin and meso-zeaxanthin can be found at the macula.

Macular Pigment – The dietary carotenoids lutein, zeaxanthin and meso-zeaxanthin accumulate at the macula where they are collectively known as macular pigment.

Oxidative Stress – Oxidative stress refers to damage by reactive, unstable molecules. These molecules, which include free radicals, are produced naturally in the body through oxygen metabolism.

Retina – The retina is the light-sensitive layer of tissue at the back of the inner eye. It acts like the film in a camera; images come through the eyes’ lens and are focused on the retina. The retina then converts these images to electric signals and sends them via the optic nerve to the brain.

Zeaxanthin – A natural carotenoid entirely of dietary origin, which accumulates at the macula at the back of the eye. Zeaxanthin is commonly found in brightly coloured fruit and vegetables such as peppers and sweetcorn.